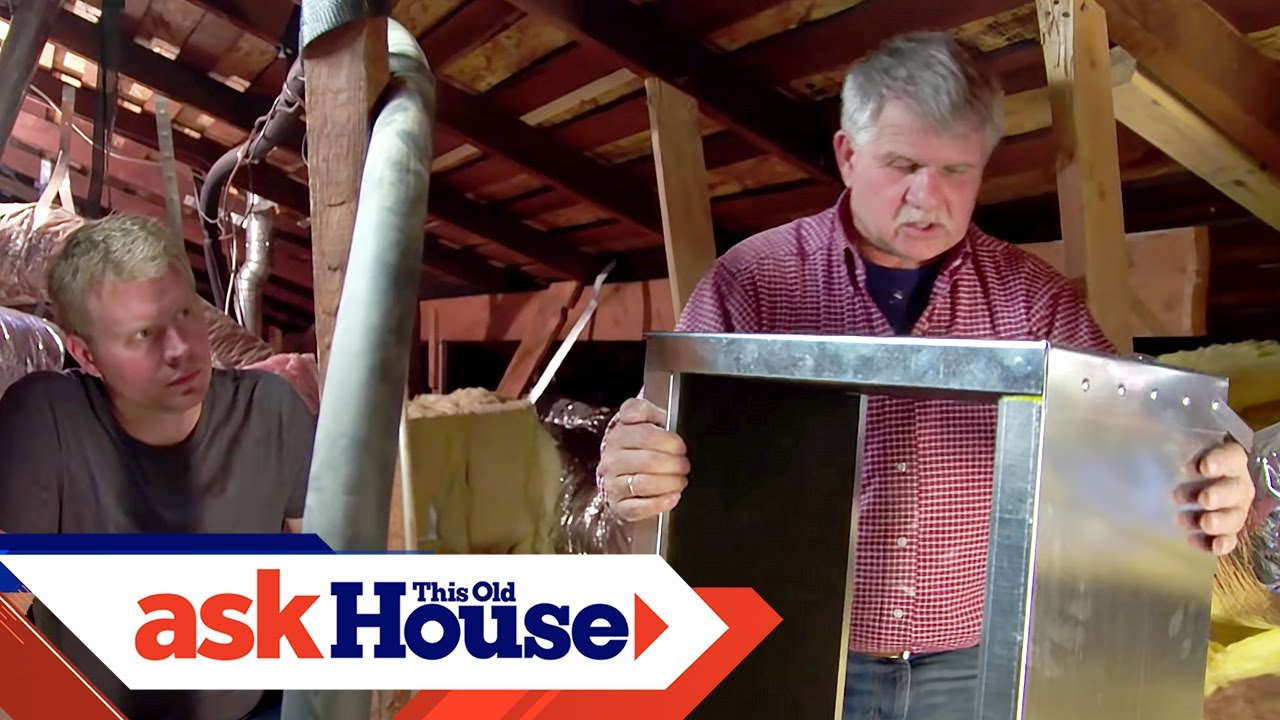 Steps for How to Install an Electric Whole-House Fan:
1. Identify an appropriate location in the attic to install the fan. It should be close to an electrical outlet, between two ceiling joists, and not near any pilot light.
2. Remove the insulation from between the joists in the fan’s location.
3. Install solid blocking between the ceiling joists. Cut the blocking from the same 2x lumber as the joists.
4. Fasten the blocking by driving 3-inch drywall screws through the joists and into the ends of the blocking. Use a layout square to ensure the blocking is square; that is, perfectly straight up and down.
5. From the room below, use a drywall saw to cut the ceiling opening for the fan. Use a wet/dry vacuum to catch the dust while sawing.
6. From inside the attic, apply a continuous bead of acrylic latex caulk along the top of the joists and solid blocking.
7. Set an insulated isolator on top of the joists and press it down into the caulk.
8. Secure the isolator by screwing its metal tabs to the joists with 1 1/4-inch drywall screws.
9. Run a continuous bead of acrylic latex caulk around the top of the isolator, then set the whole-house fan on top.
10. Secure the fan by driving 1-inch sheet-metal screws down through the fan’s flange and into the isolator.
11. Plug the fan’s power cord into the nearby electrical outlet.
12. From the room below, screw the louvered vent to the fan to conceal the ceiling hole.
13. Use the handheld remote control to operate the fan.

Shopping List for How to Install an Electric Whole-House Fan:
– Whole-house fan with remote control and insulated isolator
– 2x lumber the same size as the ceiling joists, used for solid blocking
– 3-inch drywall screws, for securing the solid blocking
– Acrylic latex caulk, to seal isolator to ceiling
– 1 1/4-inch drywall screws, for attaching the isolator to the joists
– 1-inch sheet-metal screws, for securing the fan to the isolator

Tools for How to Install an Electric Whole-House Fan:
– Miter saw or circular saw, to cut the solid blocking
– Cordless drill, to drive screws
– Layout square, for squaring up the solid blocking
– Drywall saw, for cutting hole in ceiling
– Wet/dry vacuum, to collect drywall dust
– Caulk gun, for applying caulk

About Ask This Old House TV:
Homeowners have a virtual truckload of questions for us on smaller projects, and we’re ready to answer. Ask This Old House solves the steady stream of home improvement problems faced by our viewers—and we make house calls! Ask This Old House features some familiar faces from This Old House, including Kevin O’Connor, general contractor Tom Silva, plumbing and heating expert Richard Trethewey, and landscape contractor Roger Cook.

How to Install an Electric Whole-House Fan | Ask This Old House
https://www.youtube.com/user/thisoldhouse/